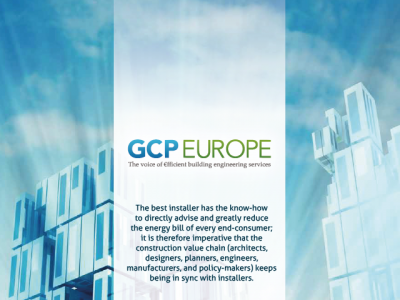 At the occasion of the annual congress of GCP Europe on 20-22 October 2016, the Secretary-General Thijs de Wolff presented a new brochure to support the representation of interests of GCP Europe’s installers of technical building equipment. The brochure can be downloaded below, or here.

GCP Europe envisions, as voice of the efficient building engineering services sector, that the best installer has the know-how to directly advise and greatly reduce the energy bill of every end-consumer; it is therefore imperative that the construction value chain (architects, designers, planners, engineers, manufacturers, and policy-makers) keeps being in sync with installers.

As one of the last players in the building value chain, and to the building occupant the most visible player, the installer of technical building equipment is a powerful force in the European Union’s energy transition. Installers of GCP Europe (mainly plumbing and HVAC – heating, ventilating and air-conditioning) are adequately skilled to work with components and systems of various producers, and guiding the end-consumer in a face-to-face and easily understandable manner.

The President of the German Sanitation, Heating and Air Conditioning Association (ZVSHK), Mr Manfred Stather, accentuated this advantage in his address to the congress, which was splendidly hosted by ZVSHK. ‘Specialist companies in the sanitation, heating and air conditioning trades have become important agents in shaping the future of Germany in the context of the energy transition’, Stather said. ‘We are currently experiencing veritable boom period in economic activity. In 2015, the over 50,000 companies in our sector enjoyed increased levels of economic success compared to the previous year for the eighth year in a row. With total current turnover of 39.5 billion euros, the sanitation, heating and air conditioning trades are without a doubt now important contributors to Germany’s gross national product.’

ZVSHK further added to the congress programme of meetings of statutory bodies and the working group on Energy, by arranging an engaging keynote presentation on climate change by Mr Anders Levermann, Professor of Dynamics of the Climate System at the Potsdam Institute for Climate Impact Research. ‘This congress demonstrates the unifying power of important issues for the future such as energy efficiency and climate protection in buildings’, said President Manfred Stather, who was proud that GCP Europe is giving a common voice to our sector in these processes.