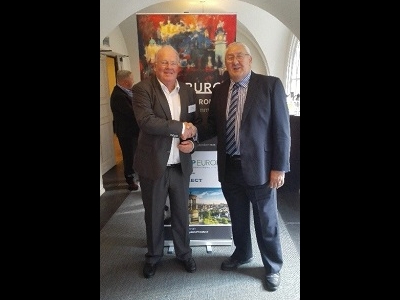 Brussels, 14 September 2015 – On 9-12 September, GCP Europe and its partner association AIE convened in Edinburgh for the Joint Installers Summit, the bi-annual event where mechanical and electrical contractors convene for a joint conference and networking. The speakers that addressed the conference were Mr Fergus Ewing, Minister for Business, Energy and Tourism for Scotland, on rolling back bureaucracy and engaging trade bodies for rule-setting, secondly Mr Jonathan Astwood, Head of the Scottish Government’s Building Standards Division Practice Unit, on the Approved Certifier Scheme, and lastly Mr Rudi Klein, Chief Executive of the UK Specialist Engineering Contractors Group, on the need for re-engineering construction procurement.

For its part, GCP Europe held meetings of the Board and General Secretaries Committee and the General Assembly, where discussions to shape forthcoming activities focused on the issues such as the European Commission’s review of the Energy Performance of Buildings Directive, the increasing importance of Building Information Modelling, and the campaigns of national associations for sustaining the new installer label (legal EU requirement per 26 September 2015).

The event organisers of Select, the Scottish electrical contractors association, inspired the participants by proposing a social programme that led from the golf court to the City Chambers and the stunning hill castle, a stroll on the Royal Mile and a visit to the royal palace of Holyrood.